As a 24-hour full-service law enforcement agency, the administrative management and support of the Montgomery County Sheriff’s Office is a major undertaking. The Sheriff’s Office currently manages an annual budget of over $22 million and a total of 395 employees, including deputy sheriffs and civilians, spread across four divisions. 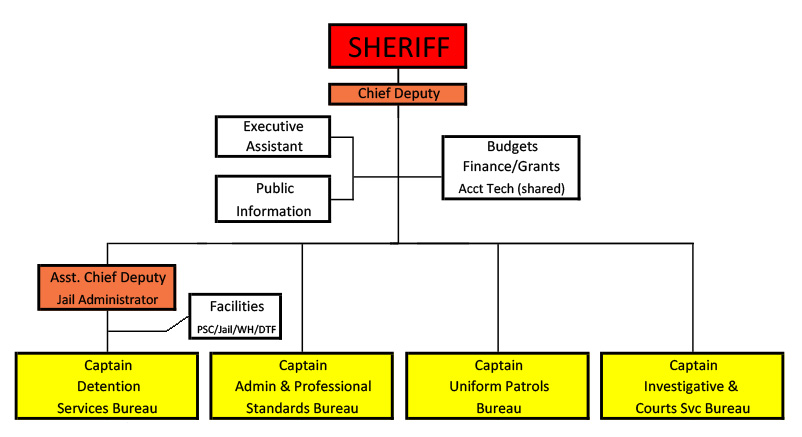 The rank structure of the Montgomery County Sheriff’s Office establishes a chain of command for commissioned deputy sheriffs that allows operations to be effectively directed. The chain of command is a series of management positions in order of authority with each higher rank representing a higher level of responsibility. Higher ranks like Captain and Lieutenant represent a broader range or scope of authority, while lower ranks like Sergeant and Corporal represent a more focused on specialized area or unit of supervision.

The organizational structure is composed of eight basic ranks:

* In the Enforcement Division, there are two Sergeant ranks: Sergeant and Investigator Sergeant. While Investigator Sergeants are compensated at a higher pay grade, the scope of authority is the same. In the Detention Divisions, there are two classifications of Sergeant: Shift Commander and Sergeant. Shift Commanders have authority over an entire shift, including other supervisors with the rank of Sergeant, even though their pay grade is the same.