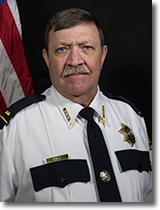 The Montgomery County Jail processes an excess of 11,000 individuals on charges ranging from civil matters to murder. These inmates are from every ethnicity, age, and socioeconomic background. With an average daily population of nearly 500, the administrative and operational resources required to operate the Montgomery County Jail are huge. The Court Transport Unit of the Jail Division’s Administrative Services Section is responsible for transporting over 10,000 inmates to and from court annually.

The inmate work program allows non-violent offenders who have been sentenced for misdemeanor crimes to serve their time productively. Up to 144 male inmates may be held at the Montgomery County Workhouse, many of whom report for confinement Friday evening through Sunday afternoon.

Some inmates assigned to the Workhouse have the opportunity to work off a portion of their sentence by working with a litter abatement crew. This is a funded project that allows inmates to contribute to the community during their confinement by clearing the right-of-way and pick up litter along county roads.